Micro Credit has been the biggest and longest on-going program of SOJAG. This has been running since 1987, initially with SOJAG’s own resources, and later with financial assistance of PKSF. A total of 35,237 individual group members of 330 villages of 28 unions under 6 upazilas have been brought under this activity.

Livestock: Livestock was an integral part of agriculture even a few years back as lands were ploughed with bullock driven power. Each and every farmer family had livestock for tilling the land. However, in recent times with the advent of power tillers and tractors the use of livestock is almost nonexistent. The economic benefit of raising livestock has, nonetheless, increased due to huge demands for milk and meat. Raising livestock was beset with numerous problems, namely, mortality of livestock due to various diseases, lack of veterinary services and vaccination facilities.

With the objective of increasing financial development of farmers, SOJAG launched Livestock rearing project in 2006. Under this activity interested farmers are being provided seasonal loans and repayment is made in single installment after sale of the livestock. The first year witnessed a resounding success with 100 percent repayment. Since then the program has continually grown in size and volume and currently it is the second largest program of SOJAG. SOJAG provides full technical assistance in form of supervision and monitoring and veterinary services by trained staff. Such intensive monitoring and supervision helped reduce mortality to almost zero. SOJAG has demonstrated successfully that any family can profitably raise 6-8 livestock and be able to earn a substantial income. SOJAG is also striving to establish family based ‘mini farm’.

Livestock rearing and poultry farming are highly potential sectors in the socio-economic development of Bangladesh and in poverty alleviation. This potential exists because of various factors at play. That this immense potential has not come to fruition may be attributed to the lack proper planning and disregard and neglect on the part of implementers. Even most of NGOs involved in social development and poverty alleviation have not persisted in their efforts in these profitable sectors. It is a well-known fact that a large portion of the credit provided by these NGOs to their clients are invested in livestock and poultry farming. It is pertinent to mention that investing in this sector can be as profitable as it can be fraught with risks. Even though the resources to stave off livestock diseases are available, it is not widespread and readily available thus clients and farmers have to face risks that could be avoided had the services and medicines were easily obtainable and affordable. If these services were made accessible this sector, it is expected, would prosper and contribute to poverty alleviation and improved standard of living. Needless to mention if progress is to be achieved in this sector GO-NGO cooperation and coordination is imperative with NGOs playing the role of catalysts and change agents.

SOJAG has continued its sustained efforts in the fields agriculture for more than one and half decades and in livestock rearing for the last six years. With the intention of achieving food security and considering the plight of farmers, SOJAG has been actively involved in these two basic production sectors. It is needless to say that in the Bangladesh context these two sectors are dependent on nature and are deemed risky and uncertain. Sincere and effective efforts in reducing the risks or removing them have not been noticed. Even though the need and importance of the much talked about Crop or Livestock insurance is recognized in all quarters, actual programs or activities for implementing those have been done by anyone.

Discussions at the grass-roots level and with actual farmers revealed that the main risk in livestock rearing was the death of the animals, which most considered to be most deterrent factor. The financial implication in the event of deaths of livestock is immense and most of the times proves to be irreparable. Along with reducing the risk of death of animals, most of them being preventable, if measures were undertaken to make up the loss on the part of farmers, it was expected that more and more farmers would be encouraged to engage in this activity.

In the backdrop of these circumstances, considering the helplessness of livestock farmers, SOJAG undertook some innovative activities to redress and remove possible risks in this sector and enabling them to bear any losses caused by forces beyond their control. This resulted in launching the experimental Livestock Insurance in 2008.

Initiative to Reduce Mortality Rate: SOJAG recruited three University passed veterinary surgeons in order to treat and care for livestock diseases. At the same time field staff of Agriculture Department of SOJAG were provided training on basic care for livestock and vaccination. It was ensured that all livestock purchased with SOJAG credit were provided with vaccination. The full time veterinary staff including 35 Para-Vets and 3 Veterinary Surgeons provide round the clock consultations, treatment and care for the livestock of SOJAG clients and farmers. SOJAG established a Demonstration Farm with 250 cows and bullocks to demonstrate the ideal way of rearing livestock. A successful timely vaccination and other interventions resulted in a significant reduction of livestock mortality. In 2016 SOJAG provided credit for 15,315 livestock of which only 124 cattle-heads died which amounted to a rate less than 0.52% percent.

Compensation in the event of death of livestock: For a share-cropper, a marginal or an impoverished farmer the death of cattle-head is a big investment and huge asset. In the event of death of that animal may spell financial disaster of a magnitude which the farmer is unable to cope with and recover from. It was realized that if at least the purchase price of the animal could be reimbursed or returned, that person would be able to stand up again and continue in this venture. It could provide a safety-net for the affected farmers and widen the scope of opportunity for self-employment.

With this end in view SOJAG arranged series of discussion sessions with livestock farmers. The common expressed issues were the helplessness and utter despondence of farmers in the event of death of livestock along with the scarcity and knowledge on vaccination and scientific ways of rearing livestock. It is generally expressed that well-coordinated effort were needed to avert such risks. SOJAG considered this a new area of intervention contributing to achieving success in Livestock program. As a follow-up of these discussions, it was agreed upon by all that a ‘premium’ of Taka 200 only per cattle-head would be paid for livestock purchased on 6-month loan. This arrangement is only applicable in the case of cow-fattening program for the afore mentioned duration.

The modalities of payment of premiums were also discussed at length. Even though most of the farmers and SOJAG staff were of the opinion of deducting the premium amount at the time of payment of the loan, farmers were asked to pay up spontaneously and on their own initiative. This was due to the fact that SOJAG believes that such a decision amounts to arbitration and an imposition. Leaving this option open and not being imposed would bring out and foster a sense of social responsibility and accountability.

There was this great sense of apprehension, on the part of SOJAG staff that even though the option of payment was left open, farmers would find avenues and issues of not paying the premium amount. However, this turned out to be completely opposite. It was a matter of great surprise and delight that every one of the clients paid up in time and of his/her own volition. This success was attributed to the sincerity and the ability to foresee greater long-term benefits on the part of the clients, on the one hand, and the effectiveness of SOJAG administration and mutual cooperation, on the other.

Financial benefits of Insurance: The financial benefits through insurance are subject to certain conditions. The first is, the owner of the cattle-head must abide by the directives given by SOJAG staff in terms of treatment, vaccination and care of the animal. The farmer must accept and maintain a ‘Heath Card’ for the animal. If the cattle die even after all these interventions, the full cost price of the animal will be reimbursed along with a payment of Taka 1,000 per month multiplied by the number months the farmer reared it. For example, if a farmer bought the cow for Tk. 25,000 he will be paid the cost price in full; and if he reared it for 5 months he will be eligible to receive further Tk. 5,000, in total Tk. 30,000. This program has been running without any hassle for the last 8 years.

The following table provides the details on the number of cattle-heads by year and other indicators:

CONCLUSION: Livestock insurance, though a very significant area, has remained largely ignored. The benefits of this program for the marginal, small and share-croppers can hardly be over-emphasized. The success and effectiveness of this program by SOJAG need to be considered with gravity and significance. We would like to celebrate and revel at this success. We wish to send a message across to the farmers who toil hard to provide food and protein needs for the people. We would like to reiterate that if programs are carried out with sincerity, dedication and commitment, without taking recourse to unfair means, it will engender trust and a bond with partners and stake-holders in our endeavors.

Artificial insemination (AI) is one of the most effective tools available to cattle producers to improve productivity and profitability of their cattle operation.   The advantages of using AI are numerous and well documented. Some of them include:

SOJAG has procured 13 Friesian Bulls and set up an Artificial Insemination laboratory staffed by one Veterinary doctor and 5 para-vets.  The program has started in full-swing since January 2017 and to date 1,700 cows were inseminated. SOJAG charges a modest fee of Tk. 500 per case. 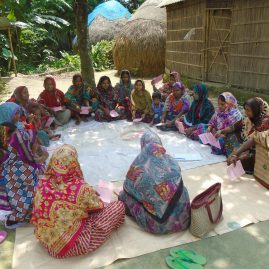 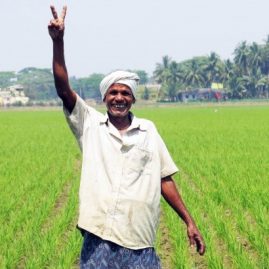 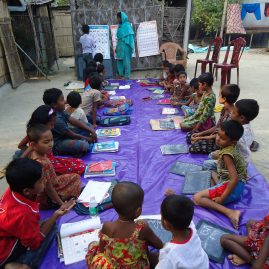 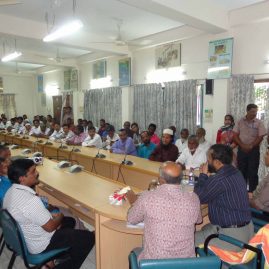 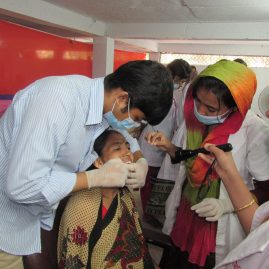 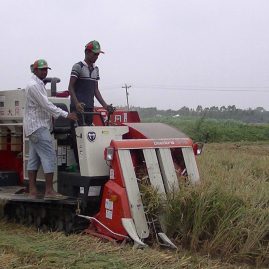 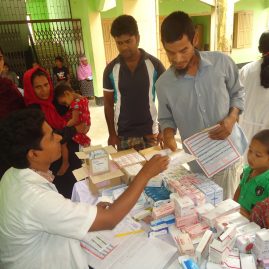