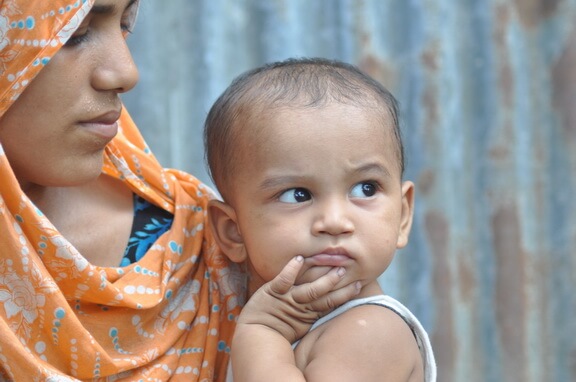 Does this Child know!?!

Look at his eyes, the facial expression, fingers on his chin, the raised eyebrow!! But how can he? He is only 9 months old! How could he know that his father is one of the hundreds of others who lost their lives in one of the worst industrial disasters in history! His father worked in a Garments Factory located in the 9-storied Rana Plaza that collapsed on April 24 in a matter of minutes.

A little bit of background information would help in putting this child into perspective!

Ms. Midori Kon of Ogaki UNESCO Association, Japan has been a longtime friend of SOJAG providing financial assistance for its non-formal education program for the underprivileged and school drop-outs.

When she heard about the Rana Plaza disaster she, along with others in her organization, launched a fund raising campaign. She personally came down to hand over the funds raised to SOJAG and also expressed a desire to meet the families of those who died in that incident and also those who became physically disabled.

We from SOJAG identified 33 such families within Dhamrai Upazila (sub-district) which is its working area. Midori visited seven of those families. While talking to the parents or mothers she became so emotional that she could hardly hold back her tears! Almost all these families are in dire straits, both emotionally and financially! The last part of our trip took us to CRP (Center for the Rehabilitation of the Paralyzed) where in one ward alone there were 62 admitted victims of the Rana Plaza. All of them suffered loss of limbs and we saw one woman both of the legs of whom had to be amputated!

SOJAG is now in the process of implementing a rehabilitation and livelihood program for these victims with its own resources and with the assistance of Ogaki UNESCO Association of Japan!