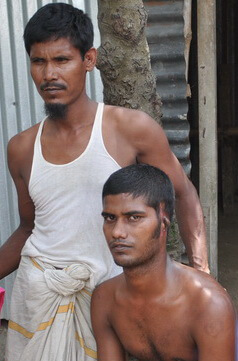 Nasir is one of the lucky ones to be alive. But his story was so amazing that belied reason and logic! He said he was on the 8th floor and as the building started to shake he was so driven by panic that he just jumped out the window from the 8th floor and landing on a tin roof seven floors down.

His whole body was riddled with cuts bruises but his skull, he said, was almost disjointed! He fought for 41 days in the hospital during which time the doctors did a major sewing up work to put his skull back! Amazingly he can walk now and with no visible neurological disorders! There are other stories of such miraculous escapes from certain death!